Election Day 2018 is here. Far too many Americans are likely to bypass the polls and contribute to the embarrassingly low voter turnout in the United States.
The culture around voting in the United States is bad and could get worse, as these alarming statistics from the most recent presidential election demonstrate:
• 76.2 million — that’s the number of Americans who are eligible to vote but didn’t bother to even register for the 2016 election. That number is 14.3 million more than the 61.9 million Americans who voted for Donald Trump for president.

• 61.4 — that’s the percentage of Americans of voting age who voted in the 2016 election, according to the U.S. Census Bureau. That figure is down slightly from 61.8% in the 2012 national election.

How can we get more of the population to take advantage of their right to vote? We can begin by purposefully starting to teach our children about the importance of voting — primarily by doing it ourselves and allowing our kids to tag along with us. Here are five ways to get your kids more involved in and aware of elections and voting.

1. Discuss voting
As the election approaches, voting should be an open topic of discussion, perhaps as you drive your kids to school or you sit around the dinner table. You can share what politicians will get your vote. Or if you feel that’s a private matter, you can discuss what issues are most important to you. You can also ask your children whom they’d vote for or what issues mean the most to them. You might also share with your kids that voting is a hard-fought right for which many people died in wars such as the American Revolution and the Civil War. For most of history, the men with the most land and the most powerful armies made the decisions without consulting the rest of us.

2. Volunteer
Show your kids how important elections are by volunteering for a local candidate. You can stuff envelopes, make phone calls, canvass. You can even encourage your kids to get involved, too. If backing a candidate isn’t your thing, you can volunteer to be an election judge and make sure the election goes smoothly in your precinct. Plus, there are usually doughnuts involved. Democracy is a participatory activity — not a spectator sport.

4. Encourage your schools to make Election Day part of the curriculum
As Election Day approaches, teachers can introduce voting-oriented activities into the lesson plan. For instance, they could ask the students to vote on today’s snack, cookies vs. brownies. The treat with the most votes would be served to the entire class. The teacher could then ask the class about their feelings about the result and whether they thought the outcome was fair. Children are hyper aware of unfairness, but also instinctively understand that voting is the fairest way for groups to make decisions that affect all of the members. 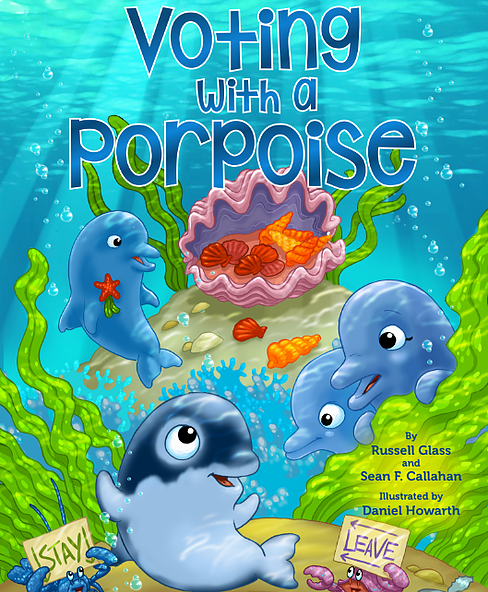 5. Make bedtime reading about voting
There are a handful of good books out there the demonstrate the value of voting to your kids. For example, novelist Dave Eggers (author of “An Incredible Work of Staggering Genius”) recently wrote a book for children about civic involvement. We also just released an illustrated children’s book called “Voting With a Porpoise,” which tells the engaging tale of a dolphin pod and a porpoise voting holding an election to make a decision that will affect the entire pod.

We believe we need to change the culture around voting in the United States for future generations. Your vote counts and has tremendous power. And so does your example. Use it!

Sean Callahan is a content marketer at LinkedIn. He has written several books including The Leprechaun Who Lost His Rainbow, A Wild Father’s Day and co-authored The Big Data-Driven Business. His journalism work has also appeared in The New York Times, The Washington Post, and Notre Dame Magazine. Callahan lives with his wife and two daughters in Chicago. He is also a voter.

Russell Glass is a serial technology entrepreneur and author, having founded or held senior positions at four venture-backed technology companies and co-authored The Big Data-Driven Business. He is currently the CEO of Ginger.io, an on-demand behavioral health company, and a board member of Rock the Vote where he uses his experience with technology, data science and narrative branding tactics to develop unique strategies to increase engagement and turnout among young votes. He is also a voter.
Connect with Callahan and Glass at BooksWithaPorpoise.com. Voting With a Porpoise is available wherever books are sold.