Actress, songwriter, music producer, reality television star, restaurateur and entrepreneur are all roles that Kandi Burruss-Tucker plays on a daily basis. It’s no wonder her impact is immeasurable in film, music and television and among her millions of fans. If you ask her what her most important roles are, she will respond without hesitation, being wife and business partner to her husband Todd, and mother to her 14 year-old daughter Riley and 19 month-old son and inspiration behind the Raising Ace brand, Ace, and stepmom to 19 year-old, Kaela. CEOMOM enjoyed our candid conversation with  Kandi as she told us her key to success and how she balances all of her diverse roles. 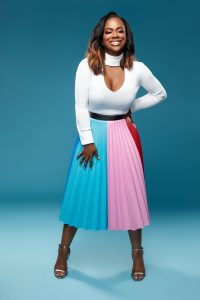 Congratulations on all of your success and new business ventures. You have been a powerful businesswoman for years now. How do you maintain balance and consistency with your career and family?
It is kinda hard sometimes, because there is so much going on. The main thing I try to do is schedule my family events the same way I do business. I put all of my family events on the calendar for everybody who works on my team. They can see it so they won’t try to overbook me or make me miss anything that is important for my children or my husband, family and close friends. That happens a lot. You have a lot of people working with you and they try to attach you to everything all of the time, not knowing that you were supposed to be at a basketball game that day or at the kids’ picnic. I put those things on the calendar just like everything else. I don’t care how much money they’re paying me, I have to be there for my family.

As far as day to day, I just make sure I try to take my daughter to school everyday and pick her up when I can. I don’t care how late I’ve been up the night before, I get up to have that time with her.

Do you want your children to follow in your footsteps?
For Riley. singing is just something fun to do. I don’t feel like I’m pushing her to make singing a career. She likes to sing. For now, we’re going in the studio to see what she can do. She did Better Late than Never. She loves the responses she’s received from everybody. People have been showing her so much love. My daughter is a Nicki Minaj fan. Nicki Minaj congratulated her on the song. That just made her life. I will support my daughter’s dreams no matter what she wants to do whether it’s singing or being a lawyer. I just want her to be productive and successful.

When you have a new baby, breathe and remember it is only for a moment. You don’t have to be perfect.

What is the toughest part about being a mom and being on a sometimes controversial TV show?
It’s been hard. It’s so much craziness happening on the show. You have people who want to say negative things to your children on social media, because they feel like they can, because you’re on reality TV. Riley has been a part of this journey with me on reality TV since I started. The discussion happens mostly with her. I remember when I didn’t allow her to watch the show. She pleaded her case and said that she needed to know what was going on so she can address other kids when they say something. I realized she was right. It helped her to build tough skin and know what to say.

When my stepdaughter first came to Atlanta, dealing with the show was hard for her. She got really upset with things that were being said on the show, especially regarding her father. She had to learn that you just have to live your life. It was an adjustment period. I feel like when they get used to it, it makes them stronger people.
Read the full interview in our October 2017 issue.