In 1947, Mrs. Piggle-Wiggle made her debut in a series of books centered on misbehaving children and magical cures. Although written decades ago, the stories and lessons depicted in Mrs. Piggle Wiggle are as relevant today as they were then. Annie Parnell, great granddaughter of original author Betty MacDonald, understands the sustainability of Mrs. Piggle-Wiggle’simpact on modern parenting. In collaboration with author, Ann Martin, Annie continues Mrs. Piggle-Wiggle’s magical adventures through her great niece, Missy Piggle Wiggle.

CEOMOM Magazine spoke with Annie about her involvement with such an anticipated reboot, and future plans for the series. Read an excerpt from our interview and stay tuned for the full feature in our January 2018 issue.

For our readers who may not be familiar with Mrs. Piggle-Wiggle, describe the storyline of the original series.
Mrs. Piggle-Wiggle was set around this lovely older lady who lived in an upside down house with a lot of animals. Parents would have a child who was exhibiting really difficult behavior. They would call a friend who would say their child was perfect. They would call another friend who would let their child’s behavior continue. After all of that they would call Mrs. Piggle-Wiggleand she would come up with some magical cure. Usually it involved the child in question having to suffer the consequences of wherever their behavior would lead. The consequences may involve something like having all of their tattle tales follow them around in a puff of smoke. The kids would get tired of the consequences and change their behavior. 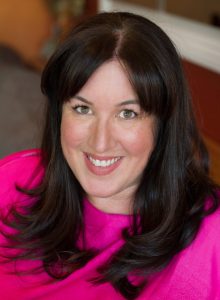 Other than being the granddaughter of Anne MacDonald’s, one of the last authors of the series, how did you get involved with the Mrs. Piggle-Wiggle reboot? What was your inspiration?
I have 2 kids so I was always looking at the original material from a fresher perspective and I was feeling how relevant it was. I feel like Betty’s solutions were tapping into what a lot of the best parenting books are talking about today. You allow the kids to be a part of the actual solution. They learn so much better and feel more empowered.

I didn’t want to reinvent Mrs. Piggle Wiggle. She is her own character. I wanted to make something that was even more relevant to today’s children and could easily translate to television.

Missy Piggle-Wiggle and the Whatever Cure and other books in the series are now available in bookstores and online.