The ability to write children’s books is a unique gift. Creating characters that are not only visually appealing, but are relatable to young readers is no easy feat. Ylleya Fields has taken it a step further to create children’s books centered on a character her children and those like them can relate. Princess Cupcake Jones is a modern day Princess who loves her tutu and playing with her toys. She learns a variety of life lessons such as the importance of keeping her castle tidy. CEOMOM chatted with Ylleya to discuss the vision for Cupcake Jones and what’s next for the character. 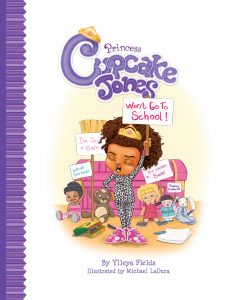 What inspired the character Princess Cupcake Jones?
My children are the inspiration for Princess Cupcake Jones. Her physical traits are inspired by my eldest two daughters. At the time when I decided to write my children’s book, there weren’t many African American picture books. Many of the books that were available didn’t have themes that my daughters could relate to. My daughters’ really enjoyed books like Fancy Nancy and Pinkalicious however there were no books like these that featured an African American lead character.

What is your process for creating stories for Princess Cupcake Jones? How do you determine her next adventure?
I don’t have a process! It’s a very organic and natural thing. I will literally have an experience with my children and then an idea will pop into my head, out of the blue. That usually ends up being the basis for the next story. Next, I hurry and put the notes in my phone, so I don’t forget! Then, I just wait until this process happens again. Luckily for me I self publish so I don’t have a deadline, because if I did that would be a very problematic way to write.

If I were to have a process I would first create an outline. I would come up with an idea or major theme and then put it into bullet points. Next, I would introduce the character, create a problem and then get the character out of that problem. That is the basis of how each of my stories should go. Whether or not I stick to that is another thing!