We bring not only memories into the room, but we also bring our pain and our pride, intertwined with success and sorrow, and often with stories of sadness and struggle.  We bring dried tears as sacred and sacrificial offerings — etched as wrinkles – often invisible – on our faces, like scars from African ancestral tribal markings.  Yet we are proud — proud of our own perseverance and persistence in places of peril when our fire and flame should have been stomped out; yet still we stand, resilient.   With elegance and sophistication, hips and lips, and our breasts leading the way – breasts that with White milk nourished the Whiteness of America  — as mammies and maids and midwives, we walk into rooms. Yes, when a Black woman walks in a room, much much more walks in with her.  Centuries of Black motherhood, of Black womanhood, of Black Goddess energy accompanies us, as our ancestors, as our angels, as our assistants to guide, direct, comfort, and console.

When a Black woman walks into a room, there is often something else, something submerged and sublime, simmering below the surface, like fine wine – maturing in barrels of our body until it’s time to be poured out – sometimes smooth and silky. Other times explosive, unrelenting, wounding. Formed from the bowels of the earth — marinated for decades in juices of dirt, decay, and death.  Formed from the misery and madness, the malfeasance and the mischief, and the mistreatment by miscreants. It walks with us. It has no name; but It is part of us.

Yes, Yes, when a Black woman walks in a room, It comes with us.  For It is Us and It is our power.

Imagine if the Black woman who walks in the room was born in 1928, just outside of the Great Depression in rural East Texas.  One of 8 children. Her mother – a maid; her father – often in prison for stealing from White people.   Who could blame him when he was the product of a theft – generations stolen in slavery for their bodies to be used and bruised for the building of America?

Imagine, for a moment, if the Black woman who walked into the room came from an uneducated sharecropping family – living in utter poverty, moving often from house to house trying to eek out a living in shelters that could barely be called a home.  Imagine if that Black woman’s grandmother was a slave – her own body belonging to another – available at the whim of Whites – caring for  and carrying the land upon which her ancestors’ blood had been shed in brutal beatings, yet still tilling the soil for White America’s prosperity.

Imagine if that Black woman’s mother — living in such utter poverty that to save her children from starvation — had to fashion a trap from clothespins hanging off of a windowsill to catch a bird to feed her eight children, telling them to imagine that the defeathered bird was a chicken. Imagine that same Black mother’s children eating from a garbage dump and chewing as gum the tar from car batteries, from cars discarded and dumped in Black communities — toxic dumps feeding Black children.  Imagine that Black mother telling her children to bring her buckets of snow to mix with sugar and vanilla to make ice cream – making a game out of desperate moments – snowballs transformed to snow cones. A commitment to survival; a refusal to surrender to starvation.

Imagine if one of those Black woman’s daughters, as a young black girl in a dress with braids at the age of 8, remembers going to the mailbox to get the mail and when the White male postman said, “Hey boy,” she proudly proclaimed to him, “I am not a boy, I am a girl.”

Imagine that same little Black girl, running home with pride to tell her mother how she told that White man that she was a girl, only to be told to never do that again –  to never speak to a White man because in 1940s, speaking to a White man could mean death.

For when Black women — saavy, street-smart, and sophisticated — informed with the White man’s knowledge, and infused with the wisdom of African queens, walk into a room, each step is imprinted with power and purpose.  Each step marking and imprinting permanence and existence into the earth. Each step proclaiming and pounding out the right to be: to be validated, to be heard, to be seen, to be acknowledged, as a Black woman.

Yes, Yes, for when a Black woman walks into the room, let the room take notice. 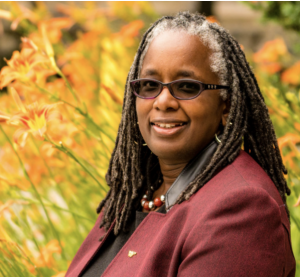 Menah Pratt-Clarke is the Vice President for Strategic Affairs and Diversity at Virginia Polytechnic Institute and State University (Virginia Tech). She is also Professor of Education in the School of Education in the College of Liberal Arts and Human Sciences, with affiliations in Africana Studies, Women’s and Gender Studies, and the Department of Sociology.  She has a bachelor’s degree from the University of Iowa with a major in English and minors in Philosophy and African-American Studies.  She received her master’s degree in Literary Studies from the University of Iowa and a master’s degree in Sociology from Vanderbilt University.  In addition, she earned her PhD and JD from Vanderbilt University.  Her research interests include transdisciplinary scholarship that crosses, intersects, and incorporates multiple disciplines, including critical race studies, Black feminism, and critical race feminism, ethnography, autoethnography, womanism, and womanist theology.

In addition to her first book, Critical Race, Feminism, and Education:  A Social Justice Model, she recently released A Black Woman’s Journey from Cotton Picking to College Professor: Lessons about race, gender, and class in America.