No matter your age, we all love fairy tales. CEOMOM had the opportunity to interview Jenia Tanaeva, who is living a real life fairy tale. This single mom came to the United States with her 2 daughters to pursue her dream of acting. With the mission to inspire women and young girls to embrace their inner beauty and power, Jenia wrote her first screenplay, See You Soon, which has already been made into a movie. If that is not amazing enough, she is working with Hollywood heavy hitters, Academy Award winning actor Harvey Keitel and Michael Eisner. Jenia will star in this modern day love story about two people who find love against all odds.

Congratulations on having your first screenplay turned into a feature film. What inspired you to write, See You Soon?
Thank you SO much!!

See You Soon is a reincarnation of the Cinderella story where Cinderella is a single mom. We read fairy tales to our kids so they believe in good, in love, in stories with a happy ending. And I think that big girls- single moms and divorced women need that fairy tale, maybe even more than little girls do. I wanted to create a heartfelt love story to give hope and motivation to women who are out there on their own, raising their children, or who may be stuck in dysfunctional relationships. I hope that See You Soon will motivate them to take that first step towards new life, new opportunities, to believe in themselves and be brave enough to start changing their lives.

I’m a single mom. I’ve been there and I want to inspire others and remind them that true love and happiness do exist!

What is See You Soon about?
It’s a story about people, about true love, about a man becoming better and stronger because of the woman he loves. It’s a great story for kids too with its magical moments. It’s a beautiful story where we can see and feel Russia, not the way it’s usually pictured in films. I love Russia and Saint Petersburg very much. A big motivation for me was to show on the big screen the beauty of my hometown, Saint Petersburg. See You Soon is about believing, trying, loving, growing and finding happiness.

You’re from Saint Petersburg, Russia. Describe the city for people who have never been there.
It’s truly a very special and unique city. When Peter the Great became the emperor of Russia the country was too Russian, he wanted to make it more civilized, more European. So he took a big trip around Europe. When he saw buildings, cathedrals, and palaces that he liked, he found the creators of those and brought them back with him to Russia- an amazing team of architects and artists- and had them build the city. So Saint Petersburg is really an open air museum of the very best of what Europe had in the beginning of the 18th century. And I have to say that Russians have done an amazing job saving the unique style of the city and keeping everything in very good shape. Oh! We also have the white nights – they last about 2 months from mid-May to the beginning of July. The sun doesn’t set at all and it’s light 24 hours a day. During this time the city looks even more magical. 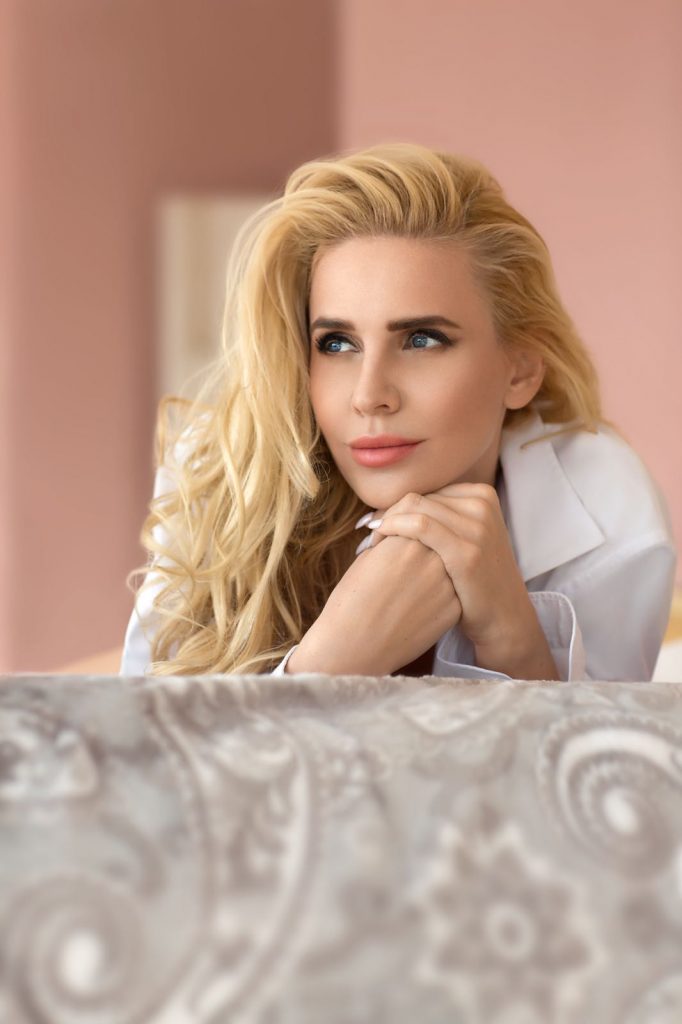 How did you get into acting?
It was my dream and I decided to pursue it. I was very lucky to find my acting coach – Eric Morris, and I worked hard every day – learning, practicing, improving… I thought that if other people can make it in Hollywood then why can’t I? In the meantime, I learned screenwriting and worked to understand all the aspects of producing movies.

What was it like acting in a film you wrote? Tell us about your character.
Her name is Lana and she’s like my baby. I created her. Of course I know her very well and I understand her feelings, what she’s going through. It was a pleasure for me bringing her to life on set. She is a young woman, a mother that was losing herself in a very unhappy marriage. She decides to change her life and the life of her son, and goes on a journey to start a new chapter in her life. She is a very loving and kind girl, but in the beginning of the movie we see her being insecure and lost until she connects with her inner strength and opens up to life.

What was it like working with Hollywood heavy hitters such as Harvey Keitel and Michael Eisner on your first feature film? How did you connect with Michael Eisner?
It was very humbling for me. I felt and still feel endless appreciation to the people who are already successful in the industry and they found my project interesting enough to dedicate their time and energy to it. I was thinking “wow! If THESE guys say it’s good then it must be really good!”  This was and still is hard for me to believe. I was introduced to Michael Eisner by a mutual friend and after he read the script and, thank God, he liked it, he was very helpful giving me notes and ideas.

When will “See You Soon” be released?
I don’t have the exact date yet, but we are looking at Fall 2018.

You came to the United States to make a better life for you and your daughters. What do you hope your daughters learn from your courage to follow your dreams?
I always tell them that when it comes to our dreams and goals, the only limits that exist are the ones we create. “If you can dream it you can achieve it!” We just have to figure out how, and find the right path. With my unconditional love and support I teach them to love themselves. When we actually believe in our hearts that we deserve to get what we want, we can enjoy the journey. But again, it all starts with loving and believing in yourself – that’s the most important relationship in our lives.